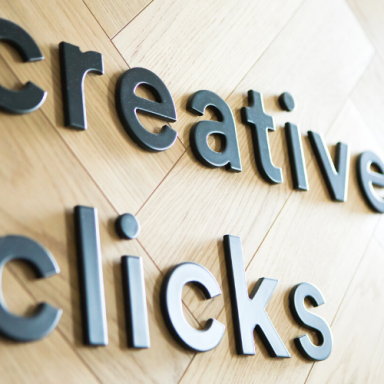 There’s nothing like a good birthday celebration. A sunny afternoon, the smell of barbeque in the air, ice cold refreshments, and a few good friends to have a laugh with. Sometimes plans are interrupted and maybe you have to bring the festivities indoors, but that doesn’t stop you from celebrating your birthday.

2020 is a big year for Creative Clicks, marking  the 10 year anniversary since the company was first founded. While COVID may have tried to dampen the excitement keeping us all indoors and away from one another, we aren’t going to let that stop us from celebrating the team’s amazing achievements.

Over the next few months, articles will be trickling out to celebrate and highlight what the company has accomplished during its first 10 years. To kick off the series, here are 10 things you didn’t know about Creative Clicks:

It all began a little over 10 years ago, 14 to be exact, when two soon to be good friends became acquainted. At the time, Raymond Kokken was working for a company called 2waytraffic, when they hired an international project manager by the name of Ramon van den Bulk.

As the two began to work together, they formed a bond. Not only did they become good friends, they also realized they had a like minded business mindset with differing strong suits. Raymond was a seasoned veteran in the performance-based marketing industry at the time with tons of experience, while Ramon had deep roots in international management, analytics, and business model KPI’s.

As they continued to work together and experience booming success, it became apparent that they were destined for bigger things. That’s when they began planning a business model together and soon after, in December of 2009, Creative Clicks was born with Raymond as the acting CEO and Ramon as the COO.

2. Timing was a Gamble

When Raymond and Ramon opened Creative Click’s doors, there was a lot of economic uncertainty. Similar to what we’re seeing now, the world was facing a global financial crisis (GFC). The GFC hit the Netherlands especially hard in the fall of 2008, resulting in an economic recession. In the fourth quarter of that same year, the economy shrank by 3.9%.

Despite the economic crisis, they knew that if they waited for a more financially stable time to open Creative Clicks, they may never have gotten the company off the ground. The mobile app boom had just begun a year prior and by waiting they could have missed their chance. It just goes to show that sometimes you need to take a leap of faith for what you believe in.

Luckily enough, Creative Clicks’ founders saw an opportunity and were bold enough to create a start-up business amidst a global economic crisis. If it wasn’t for their bravery and confidence, the company wouldn’t be here, 10 years later, recounting a story about a business that blossomed from nothing.

3. Creative Clicks has and will Always Evolve

Before launching the company, Raymond and Ramon wanted Creative Clicks to stand for something. They knew mobile apps were on the rise and internet advertising was still young. That’s when they aligned on a common goal to “monetize media.” With this in mind, they were driven to help websites monetize and build off their success.

Way back when Crazy Frog was still a thing, Creative Clicks was creating mobile content products such as ringtones, wallpapers, and logos, which all converted well to online traffic sources. But then the industry began to undergo a massive change. Crazy Frog finally began leaving our minds and our hearts, but, more importantly, machine learning and in app advertising started to become possible.

Like all successful companies, Creative Clicks decided it was time to evolve. They began shifting their focus and diving headfirst into the world of machine learning and created a brand new mission statement. The goal was now to: “empower brands, publishers, and marketers to attract and engage with global customers at a massive scale through our proprietary machine learning technology.”

As a result of their forward-thinking mindset, the company was met with glowing success. They have since grown into a global performance-based marketing agency with more than 120 employees and global clients like Amazon, Alibaba, Tiktok, Apple, Twitter, Yahoo, and many more.

4. Even the Locations Evolved

Back in 2009, Creative Clicks started its journey with a small office space on the Herengracht in Amsterdam. For those of you who aren’t familiar with Amsterdam, the Herengracht is the second of four canals belonging to the canal belt that runs along with the city. This office space was truly beautiful and had a calming view. Begrudgingly, Creative Clicks had to move to a new location. Despite the office’s amazing qualities, it was far too small for the big dreams Raymond and Ramon had for the company.

The next office space was where the company began to take its current form. Moving from a beautiful canal view to high rise buildings, the team began to expand. Initially growing from just a small 4 person office space, by 2016 they were taking up half of the entire floor. With Creative Clicks finally seeing success, it was time to treat themselves once again.

At the end of 2016, Creative Clicks moved to the current headquarters in Amsterdam with views of the lovely Rijksmuseum. Here the company spreads over three floors and has a rooftop terrace that faces The Museumplein; a plaza where the iconic Van Gogh Museum and Rembrandt Museum are located.

The expansion was not exclusive to Amsterdam. The company began to take its operations abroad in the summer of 2013 when the first office opened in Tel Aviv, Israel. The global expansion didn’t stop there. Only two years later in 2015, Creative Clicks opened offices in Toronto, Canada. And two years after that, in 2017, the team opened to the Asian market by acquiring part of Matomy and opening a new office in Beijing, China.

5. The Team Continues to Grow

To Raymond and Ramon, it seems like yesterday that they were working out of their small office in the Herengracht. But in reality, it has changed quite a bit.

Their once three-person operation located all in the same city has now grown to 120 people who work in different divisions all over the world. This was quite the growth trajectory for a small startup in 2010, but the team was passionate in its endeavors and never lost sight of the success that awaited the company.

To put this success into perspective, Creative Clicks transitioned from a startup to a scale-up around 2014. This is an accomplishment only 1 in 200 startups actually survive to tell. So it’s an enormous triumph that the team was able to complete this transition in only 5 years.

While the team continues to grow, it has been important that the team grew in diversity. This is key in bringing together innovative minds to revolutionize the business. Creative Clicks estimates that its team consists of nearly 20 different nationalities in offices around the globe that speak up to 25 different languages.

Even in the headquarters, diversity is apparent. Amsterdam has evolved into an international city featuring expats of all nationalities. Having a team with different backgrounds, who speak different languages, has helped grow the company into what it is today.

While diversity is important at Creative Clicks, what takes priority when hiring is the unique philosophy: The Triple E Philosophy.

What is our Triple E Philosophy? Energetic and Entrepreneurial Experts.

While the concept seems simple enough, it is much more. At Creative Clicks, it is of the utmost importance that the team is surrounded by other energetic people. That way each person can build off each other’s energy. If you then add in an entrepreneurial mindset where the team is encouraged to take ownership and aim for the stars, dreams can be made into reality no matter how large or small they seem.

The final E stands for expert, which simply enough means that Creative Clicks wants to be the absolute experts in the field of digital marketing. Instead of following trends, they want to set the trends. The Triple E Philosophy isn’t just followed, it’s lived.

The Creative Clicks team stays busy, running around 100.000 dazzling mobile marketing campaigns per year! This is quite a step up from the Crazy Frog days.

Now campaigns are made for companies such as: Deliveroo, CBS Sports, Shein, Alibaba, Amazon, Zynga, FunStage, Gett, Playdog, Playtika, LOVOO, and many more.

Creative Clicks has around 5000+ supply partners, which includes direct apps, DSP’s (native) sites, third-party media buyers, push subscribers, and our extensive owned and operated inventory. Throughout all these years, the team has built a substantial inventory.

Together with the generated data layer, this is the company’s secret sauce to deliver outstanding results for both the advertising and publishing partners.

The strength of Creative Clicks is without a doubt, the company’s ability and willingness to evolve based on future market trends. The company did this in their early years and it played a huge part in their success.

This evolution into a mobile performance agency that has its clients pay for specific results, has seen remarkable success. Client results often lead to app-installs, leads, and sales. This specificity allows for zero waste on marketing spending for advertisers.

Creative Clicks has been doing this for the past ten years on a massive scale as it’s developed personalized technology and data platforms with a refined algorithm that can match traffic sources and users with specific advertisers and offers. This is, by far, Creative Click’s key asset and strength.